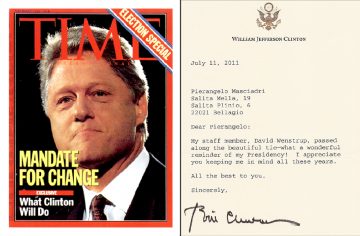 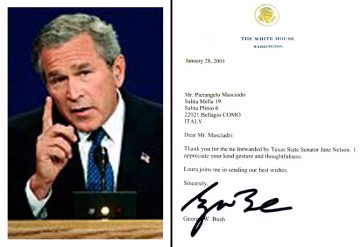 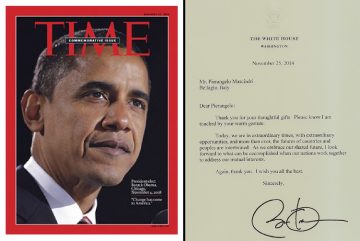 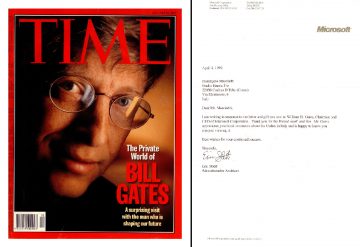 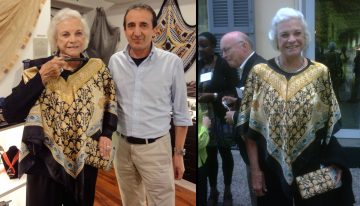 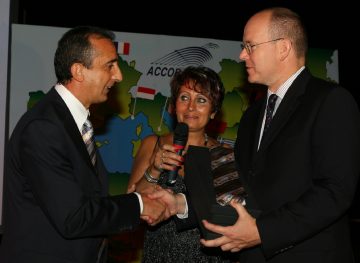 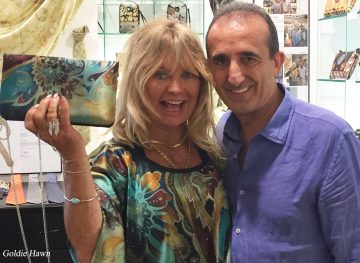 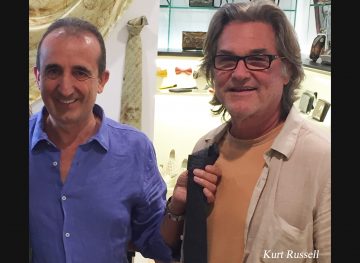 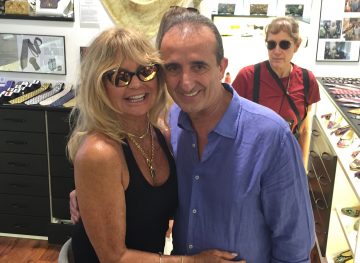 In 1992, Pierangelo Masciadri achieves fame as stylist after having designed the tie that Bill Clinton wore when he was elected for the first time President of the United States of America. From that moment Masciadri has got important recognitions from the most powerful and famous people in the world. In 1995, on the occasion of the exhibition “The Gots”, international event, Masciadri designs and produces a collection which has Prince Ottone d’Assia among his most fervent admirers. In 1996 Masciadri designs and produces a collection on Leonardo da Vinci’s Leicester Code bought by Bill Gates, whom , in a letter, expresses his admiration for the interpretation of the precious manuscript. Masciadri designs and produces also the tie that the President of The United States of America George W. Bush wears in the 2004 electoral campaign, during the first TV debate against Kerry, tie of the collection dedicated to the “Roman Mosaics”. President Bush expresses his appreciation in a personal thank-you letter. In 2006, Masciadri realizes a collection dedicated to the dolphins, given to H.S.H. Prince Albert II of Monaco, worldwide testimonial for the preservation and protection of cetaceans. Prince Albert publicly congratulates Masciadri not only on the refinement of the silk, but also on the high content of the ties. In 2010, Sandra Day O’Connor, the first female judge of the Supreme Court of the United States, guest at the Rockefeller Foundation in Bellagio, visits the shop where she appreciates the creations of the stylist and purchases a scarf-poncho of the collection “Homage to Beato Angelico”. In 2014, Masciadri reaches the President of the United States of America Barack Obama. “Thank you for your thoughtful gifts”: this is the incipit of the deep letter President Obama sends to Masciadri, directly from the Withe House. The tie and the pochette given to the President belong to the collection “Homage to Bellagio”.

Pierangelo Masciadri believes that fashion can be a vehicle to transmit cultural messages in a more spontaneous way. Wearing an item of clothing or an accessory inspired by works of art is not just an outward appearance. This is proved by the carrier of the artist, who graduated at the “Accademia di Belle Arti di Brera” and was appointed Honorary Inspector of Lombardy by the Ministry of Culture and Environment. His great interest in the architectural, sculptural and pictorial themes induced him to spread his knowledge to a wider public during the years. Each of his creations proposes the motives of famous paintings, sculptures archeological relics or architectural details, that are freely elaborated in a personal and exclusive way in order to spread culture in people’s everyday life. The collections are made out of the most precious Como silk, tradition and pride of the best high-quality silk produced in the word, scrupulously manufactured following artisanal techniques. To recreate the fascination of the scents, the light reflections and the charm of nature that only the lake and the finest silk can offer, Masciadri created the fragrance Silk Lake, for man and for woman. the collection is enriched by accessories realized with other Italian excellences, such as leather and glass, relying on the mastery of the best artisans. This is a work of high competence that Masciadri has been doing for more than thirty years, at first as a creative-stylist for the most important international brands, since 1995 for his maison and now assisted by his daughters, Laura and Silvia. Dealing directly with people is important for them: in Bellagio their shops are points of contact and dialogue also with people interested in art and fashion. It is peculiar how Masciadri can transform his scarves and shawls in stylish ponchos, kaftans, tops and blouses, teaching his customers how to wear them in many different ways. It is also very innovative and original how Masciadri uses the details of his scarves to create extremely elegant handbags, handcrafted in silk and leather, that are real jewels that enclose the charm and the essence of each scarf, enhancing the fascination of Italian art and culture. Among their admirers there are the Academy Award-winning actress Goldie Hawn and the actor Kurt Russell, the Princess of Dubai, the top-models Tyra Banks and Paulina Porizkova, the well-known leader of the rock band “The Cars”, Ric Ocasek, Vasco Rossi, the art critics Vittorio Sgarbi and Philippe Daverio.